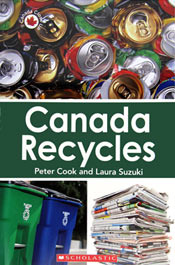 Written by Peter Cook and Laura Suzuki, and part of Scholastic Canada’s Canada Close Up series, Canada Recycles examines the whys and hows of the recycling process in Canada. Aimed at moderate level readers, it’s a fast-paced look at many aspects of the process, from what happens to your blue box after the curb to what choices we’re going to have look at in the future. 2012.